KZ has been accumulating experience in TWS earphones.

KZ S1D adopts a custom thin and light PEK composite diaphragm, the optimized unit structure is small and precise. Although the size is small but energy is large, releasing fuller mid frequency and bass frequency than expected

Adopting the Bluetooth 5.0 chip, KZ S1/S1D can support the new generation of low latency game mode. This mode has a faster transmission speed of sound signal and you can feel more amazing game experience

To facilitate the operation, this model adopts the one touch system. Simply touch the faceplate you can control everything. Built-in 40mAh earbud battery and 300mAh charging case battery, it assures up to 100h standby time

Born as an art of fine design, the ergonomic shape, the novel color, the resin material, each elements are matching perfectly. It’s a product of function and beauty. Lightweight and comfortable, it’s a daily use earphones

They had decent sound for the price but they stopped charging after about a month. 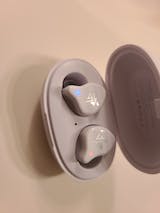 Good headphones for every day street use

Wanted the S1s, but they were out of stock at the time I ordered, so I committed to buying the S1Ds instead.

Out of the box, they're nice little units. The case is okay, the texture is not very grippy and it feels like I'm holding a small bar of soap as it almost feels like it wants to slip out of my hand when I'm handling it. The earbuds themselves are also okay, but the smooth plastic also doesn't feel very nice to hold either when handling them out of the case, and I've almost dropped them a couple times while handling them. They're nice and light, however, and don't feel like they're weighing down my ears while I'm wearing them.

For usability, the touch controls are okay enough. They're not very sensitive, but I'm alright with them being that way because it doesn't just automatically make my phone react to every touch. I do have to tap them somewhat firmly to get them to react while in my ears, but it's totally alright to me.

The stock tips they come with aren't great either. They're thin and flimsy, and none of the three included sizes made a good seal in my ear no matter how I positioned them. The sound quality with the stock eartips was thin and weak with the lack of seal they had in my ears.

At the same time I bought the S1Ds, I ordered ZSN Pros as well, and tried the extra eartips that came with the ZSN Pros on the S1Ds. Those eartips changed the S1Ds. Past the all-plastic construction, the flimsy eartips, and the meh touch controls, their sonic qualities came to life with the better eartips. Highs and mids are full and colorful, and while not the clearest or detailed, they have a sparkle to them that brings music to life. The bass is rich and deep, and fills out the rest of the sound amazingly for such a compact setup. The perfect seal of the better eartips automatically made the S1Ds the best wireless earbuds I've listened to thus far, and made them my favorite earbuds to leave the house with.

If KZ can include better eartips with them, they would be amazing right out of the box. For $20 though, you'd have money leftover for replacement silicone tips, so I still feel these are a great value.

A
Alex Neave
Good for price

Good sound quality, but don’t stay in ears quite as well as I would like (I typically use them for running). But all in all, a solid purchase

The KZ S1 sound excellent! They sound better and are more comfortable than any other wireless buds I have ever tried. They were so comfortable in fact, I would forget that i was wearing them. However, after maybe one week of use the case will no longer charge the buds or tell them to turn off. On top of that the left earbud will have terrible interference and becomes completely unusable. It sounds like an old modem when AOL was connecting to the internet. I wish I could use them because were fantastic when they worked.

J
Jun-Jun Alonzo
Excellent TWS for bang for the buck

The S1 is really good! It's my 2nd pair of TWS and the quality is really good. The only thing I would change is the ear tip, these ones don't fit me perfectly but people's mileage may vary. I also should have gotten the S1Ds since I prefer a stronger bass. But hey, no complaints here since the price is really good.

D
Dávid Kovács
Did Not Arrive

Can’t tell my feedback, sadly, because it did not arrive yet. I wonder if it will...

Superb sounds quality.
Unfortunately the left side stop working and charging after a week of using.
Can you provide me solution?
I ordered it from official KZ store in AliExpress.

1. Kindly contact your local courier using the local tracking number. We will not process a refund or reshipment of the parcel since it has been shipped.

2. Customers are to bear the consequences and fees incurred, if the parcel was undelivered due to any of the following situation: