One year ago, TinHiFi shook the audio world by releasing one of the first, and if not the very first, then the smallest, planar magnetic driver earphones. Audio enthusiasts were fascinated by the level of detail, treble extension, and speed the P1 could deliver - all at a budget-friendly price point. Garnering this success, TinHiFi has gone back to the drawing board to develop the all new P2 planar magnetic driver in-ear monitor.

The P2 adopts a completely redesigned in-house 12mm planar magnetic diaphragm driver composed of an ultra-thin nanomembrane foil and powerful N50 neodymium magnets. The combination of a larger diaphragm size and stronger magnets have the potential to offer a significantly better dynamic range as well as driver response. However, with these changes, it is necessary to note that a more powerful source output could be necessary to sufficiently drive the P2. We were immediately surprised by the enhanced resolution and clarity of the P2 over its predecessor. The technical improvements of the P2 over the P1 are significantly evident in terms of imaging, layering, and soundstage. While the P1 felt more two-dimensional with limited stereo-imaging capabilities, the P2 opened the field up with a noticeably more accurate imaging, lending to a more three-dimensional sound experience. The soundstage of the P2 has also addressed the congested feeling of the P1, feeling much more open and natural. While the pinna compensation of the P1 did give a sense of clarity and crispness on the predecessor, the overall resolution and clarity of each note across the whole frequency spectrum are leaps ahead on the new P2. For those who may have been left disappointed by the P1’s technical capabilities, the P2 has definitely addressed these faults, marking it as perhaps one of the most competitive earphones of its type.

In terms of tuning, the P2 is a different take on the original P1’s sound signature. While the P1 aimed for a neutral-like tuning, with its rolled-off sub-bass, flat midbass, and mild pinna compensation, a constant complaint from the audio community has been the lack of a sub-bass emphasis, as well as its tonally dark signature encumbered by an early treble roll-off. The P2 bases its tuning from the foundation of P1’s minimal pinna compensation that feels natural to the ear, but has completely elevated the sub-bass and midbass, giving warmth to the sound, while finally giving the bass impact that audiophiles have been craving for from the P1. As a result, lower register notes take on a needed weight and presence in the P2, but also provides a necessary balance for the extended treble extension. The bass itself is punchy, responsive, and quick, with a depth that one would expect from a planar magnetic driver. It’s a quality everyone has been waiting for from TinHiFi, and we are sufficiently satisfied with their offering.

Compared to the P1, the P2 has a more subtle roll-off in the treble response, which does save it from the rather dark signature the P1 carried. But with it, the P2 does lose a little bit of the bite and crispness that the 3~5kHz response of the P1 has. This may please those who may have found the P1’s treble to be a little too harsh, making the P2 smoother to listen to, or leave some wanting a bit more upper presence. Nonetheless, it is evident that the P2 carries a much more even treble response over its predecessor. The P2 further displays a better extended treble response, giving a greater sense of air and clarity than the already accomplished P1’s high-treble response. We recommend ear tips that allow maximum insertion depth for the P2.

Straying away from its typical extremely budget-friendly price point and packaging, TinHiFi has gone the extra mile to completely redesign its product presentation and with it, its brand image. The P2 packaging comes in a luxurious multi-layered box. Upon opening the top flap, the backside of the hinge features the product specification, as well as the unique left and right frequency response graphs of each individual unit, ensuring quality control check. Inside, we find a blue handmade genuine leather case, and while its design may vary from the previous stylish cases TinHiFi has produced, we could definitely appreciate the use of quality genuine vegetable-tanned leather. In the lower slide-out compartment, we were greeted with the typical selection of silicone and foam tips, as well as a 2.5mm to 3.5mm and 2.5mm to 4.4mm adapter jacks.

TinHiFi has always been praised for the quality of cables they have released with each one of its products. And this new luxury caliber of the P2 did not disappoint. The P2 cable features an eight-core braided pure 6n OCC copper cable that seems to be somewhere between the 22AWG and 24AWG gauge. We found the orange-yellow color of the cable to actually be that of the copper itself, and not the sleeving. TinHiFi has definitely invested heavily in developing such a high quality cable, and the standard 2.5mm termination jack, and addition of 3.5mm and 4.4mm adapters are a definite plus in our books. Furthermore, unlike its predecessors, the P2 features a recessed 0.78mm 2-pin connector rather than MMCX, providing an extremely secure fit and ease of swapping cables.

We imagine that in developing the P2, TinHiFi had a significant hurdle to leap over, as the P1 was already a well accomplished and famed set. We stand amazed by the feat that TinHiFi has been able to accomplish with the P2, both in terms of improvements in technicalities, as well as tuning, that sets a new bar for the P-series earphones. From the product presentation to the sound, it’s clear that TinHiFi set out to create a new brand image as one that is capable of achieving the mid-high tier audio products, and we believe that they have done so successfully. Not only is the P2 an obvious and well-deserved successor to the P1, it has set itself as a unique and compelling product for a new audio bracket. 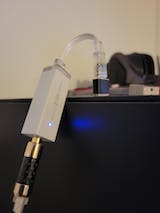 The KZ ZAR is a model that delivers a mellow neutral sound with a heavy and dense low-frequency leaning.

In terms of sound quality, ZAR belongs to the lineage of typical recent KZ signature models such as KZ ZNA, KZ DQS, and CCA CXS, which, along with DQS, are closer to the lower frequencies.