Free express shipping on orders over $200*. Enjoy free tax and duty paid to most countries. Please refer to our shipping FAQ to see if you apply.

Moji Monica H2O is equipped with a special liquid silica gel diaphragm which has two times larger amplitude than normal horn. Silica gel is not too sensitive to the changes of temperature and humidity so with broad sound stage and stable Kms, low distortion, this model presents excellent performance as in the studio.

Apart from the signature dynamic driver, H2O also comes with two custom balanced armatures for high frequency to complement dynamic driver. It features balanced three frequency with full dynamic changes and details. You are able to experience a thorough transition of quietness to movement

Inspired by a famous quote from Bruce Lee, we developed this H2O. Be water, be formless, be shapeless, like water. You put water into a bottle, it becomes the bottle. The implication manifests our scope for this earphone. Be something you want it to be because it has tons of potential. Make it your own water

Cable is something we pay high attention to since it greatly affects the final result of a earphone. Thus for H2O we choose a silver-plated copper cable with universal 0.78mm 2Pin connector for future upgrade. High Polymer TPU sleeve is soft and bright while also reduce microphonics.

Details make a product. Even for eartips we have included a few types for different needs. Elastic and soft silicone eartips, foam eartips, in different sizes will surely make the listening a pleasant experience. Your needs are heard and covered here!

Not good enough as I spected.
Average quality and plain sound.
You get what you pay for but nothing extraordinary

They’re very nice, didn’t know what to expect from them with no reviews, they are super tiny but beautiful, they fit sorta like the SSR from Moondrop, so getting a proper seal is a must to really hear them at their full potential, I ended up using foam tips, cause the stem is on the shorter side, and that did the trick.
Speaking of Moondrop, they have a very similar sound to the Starfield’s and the Aria, they have almost identical bass & mids, but it’s in the treble and upper mid range where these are differentiated some, these have more sparkle and a hint of finer detail(Due to the 2BA’s) and for me it makes them more enjoyable, also the vocals are little closer and more intimate, on most tracks the vocals are very sweet and natural but emphasized, a real nice fluidity to them that’s addicting, case in point the song, “Never Tear Us Apart” by Paloma Faith, her voice is so nicely portrayed, filled but not overly saturated and not thin, and even the breath she takes in between is heard. On Iron Maiden, “The Number Of The Beast 1998 Remastered” the opening vocals are spot on naturally, and the H2O also emphasizes guitars, snare drums, sticks and claps very well, it takes you in. I always feel when I put on the Aria, there’s somethings missing for me, that make them sort of blah for me, the Starfield’s have a little broader stage which I enjoy though, but these liven things up so much and have energy!
Bass: It’s a refine bass, so the quality is awesome but it lacks somewhat in quantity. But for me it’s highly enjoyable, it’s quick, has a nice quick decay, it reaches low, but there is a roll off way at the bottom, so you will feel the rumble, but it’s not an intense one, but you definitely feel it, and the mid-bass has a nice natural hit to them, but it doesn’t kick with authority like say the FH3’s from FiiO. So you get no distraction in the lower mids which allows you to really get absorbed with the mids and all the instruments. So onto the mids.
Mids: Listening to Hatsune Miku Symphony 2020 was simply amazing with them, instruments came out, positioning was fantastic, the violins were there, flute playing was vivid, the clarinets was easily defined, all the brass was easily visible in my head, the french horn was quite nice, the piano and organ was fluid, and the percussion instruments came out just right, all was very natural and harmonious, details popped out wonderfully. And again with the vocals, on almost 90% I was so immersed in, On this track, Vsinger Live 2017 梦之雨 I simply got lost in the vocaloids voice simply amazing, so dreamy like. On Sigrid - “Strangers”, her voice came out intimately and natural with enough warmth under it to give it life, the way that I know it does on this track. Detail again was above average, came out clear and with musicality.

Treble: On this cover by AURORA, “Massive Attack 'Teardrop'”, I was really concerned that her voice might penetrate my inner sanctum of my head, as I use it for way too lifted upper mids and lower treble, but to my surprise, listening was beautiful and quite pleasant, plus the other frequencies were quite nice, the bass guitar. Listening to Pyramid - “Cole´s Memories”, there’s lots a ambient sounds, I feel like there’s a roll off somewhere, or the peaks are even with the mid-range cause there’s sparkle, but it isn’t overly done, again right below that threshold where things can get a little harsh, so there’s a smoothness to these iem’s, even though I don’t find them on the warm side, cymbals and chimes were nice but not the best I’ve heard, kinda flat on this song, but again, they’re not bad in anyway, just something I caught on that song, didn’t notice it on the Symphony.

Overall, I’m very impressed with these, and they fit perfect for their price, very balanced set, came with enough nice ear-tips, cord was ok, and because I liked them I threw on an extra one I had to see what they could do balanced out. Again, trying to get a good seal was probably my biggest complaint with them, cause the stem was on the short side and the fact that these are a small iem to begin with, doesn’t help matters. Ok on Smartphone, but needs amp.

Used : The XDUOO TA -10 gave it air & even more space and made the vocals divine, giving it life and energy but every now and then there was a song that would peak me slightly and then I would test it out on the iFi Zen Dac (1 out of 30sh), and that made for a smoother playback on some songs and preferred them on that. One song was, “Dear Prudence” - The Beatles, the snare drum hits were a little too pronounced at around the 1:24 mark and throughout the song, but when I switched out dacs, the problem was corrected, EQ could also correct this, but didn’t want to do this for the review. But I am glad I purchased these, as these will replace my Moondrop listening sessions. 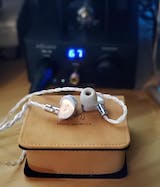 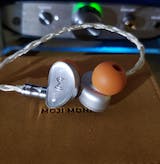 Most items over $200 include free express shipping (DHL or similar). If your order total is under $200 you can manually add Express Shipping at the checkout page for $15.00 - $35.00USD

Your are successfully subscribed for email notifications.
✖