TINHIFI P1 MAX's shell is made from lightweight resin and the panels are hand-crafted using a 3D-printed stainless steel torch wire drawing process, with a high-gloss-like jewel finish. P1 MAX is not only a good companion for music but also your decoration!

TINHIFI P1 MAX displays each detail thorough with a unique acoustic structure, with a wide sound field, bringing a full-bodied and natural listening experience that makes people revel in the music world.

Ergonomic design, the earset weighs only 4.8g and feels "free" when wearing. The earphone is molded based on professional ear canal data analysis. The special shape is comfortable for a long time to wear too and at the same time, it can increase the passive noise reduction effect. It’s improved by adjusting the angle and position of the sound tube to the ear canal, achieving a high fit.

Adopting 108 single crystal copper wire core, the sound is warm and natural, the background is clean, three frequency is uniform. Two pins changeable thread design is adopted, can be replaced with other earphone wire, get more sound quality experience. It provides 2pin connectors, matching the mainstream IEM in the market.

Not the last word in planars. Fairly balanced tuning, I just wish it had a bit better resolutuion. Bass is muddy and the highs lack sparkle. Vocals sound OK. Comfortable fit and decent cable.

D
Daniel
One of the best

At this price it is one of the best IEM with the 7hz. They're sound neutral with good bass and a detailed treble fit for anyone. The weight fit for all. The stock cable is correct too. Very good surprise at this price for a EDC.

A
Arthur
A well balanced set

At the current price these instantly become one of the best values you can find. Their sound is fairly neutral with a reasonable bass response and a detailed treble. The weight is light and the fit is good. The included cable is also nicer than most and handles well. They make for good EDC’s.

The Best sounding ear/Headphones I have ever owned. Spectacular for the price.

for 99 bucks it is a good deal, this is not an energetic set, any look at the squigs will show that. its a pretty long and small bass shelf that goes into mid bass so it doesn't hit hard and fairly week in the sub, its similar to their t4 tuning wise.
mids are great, treble has a cut in it similar to what hbb does with his units but has a spike in the brilliance area so it still remains crisp.
details and separation wise, its kind of average, nothing stunning, does have a noticeable planar timbre and i like that alot.
so this is an all day say, its inoffensive but not energetic set and its smallish and very light weight
heres the downside, theres no nozzle at all, so tips can come off quite easily so chose your tips wisely i am a fan of the included foams but decided on the CP145 tips sold seperately.
you can tape up the vent infront of the driver for a large sub bass boost 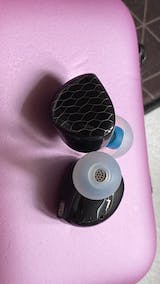 Sound great. I have buds that are twice the price, and well reviewed, but less enjoyable. Smooth, not harsh, and FUN!

W
Wolfstar76
For the price it is a gem

I have planar full size headphone and this is my first planar IEM. For the price, I would say it is a gem: good quality bass (not basshead level, nor DD bass), good Mids and non offensive treble. Detail retrievel is excellent. If you want to have a taste of planar IEM, this is a great choice.