0
Refine by
Sold Out

If you like a neutral-ish sound, this may be good. But if you have small ears, skip this. The smallest ear tips may be too big too.

Great tuning and technicalities. Swappable 2pin cable? Nice! Can swap it out to a balanced cable.

Awesome sounding neutral earphone. The bass is calm tight, the upper midrange is is almost dead center in terms of placement. Treble is neutral and extends nicely. Note: Using other tips can make the bass too bloaty and boosted less natural. Use the stock tips for neutral sound. Vocal and treble beast, the detail levels are perfect for this price point. 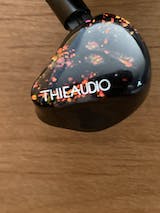 Very comfortable and soft, very easy to drive. Used it with my Samsung mobile and it was just right.
With ifi neo it was a perfect match.

These don't have the widest soundstage, but they shove a ton of detail in your head without ever sounding siblant. I recommend these for music or work. If you want something relaxing these may not be the ones for you. I own both oracles and they are different enough to justify getting both. I think I like the original oracles a little more, but I really love these too. Keeping both! Also, I changed to spinfit medium tips, made a huge difference over stock tips which didnt fit my ears well. Mem foam sounded good too. They are very pretty too. Awesome cable and case pouch!

It doesn't matter if you have tried the OG Oracle or haven't.
Oracle Mk2 will absolutely make you go through your entire libary all over again like a whole new whole different experience.

I will not cut in to many details of how it sounds to myself but briefly.
-BASS: Tight, well-separted, delivered with impact and physicality within notes from end to end (Sub-bass to mid-bass). But cleanly tone down in mid-bass for a spotless and true MID RANGE.
-MID: ORIGINALITY is the word to describe most stuff i tried with Oracle MK2 (Damien Rice, The Killers, Leon Bridges, Jacob Collier, Paramore, Electric Youth, Metallica, Guns N' Roses, Black Sabbath, The Airborne Toxic Event, Dead Letter Circus). But it's not boring by any means, the more you listen the more addicting it gets.
-TREBLE: Nothing to complain but nothing to praise either, I basically love treble more than anything (I love MEST MK1, QDC Anole VX, LetShuoer S12). Little bit smooth out, not too detail. It's walking the line between treble smoothness (Mangird Xenns Up) and spicy tasty sticky sharpy lovely treble (MEST MK1 or S12). It's alright.

-Fit and Finish: Small shell, good fit, avarage seal and passive noise cancelling. Though it's best feature is the design/color/faceplate. Black Scarlet is an entire universe in the palm of your hand believe me. It shifts color depending on reflection,lighting and your mood(lol).
-Accessories: Ok I guess, I don't care about this. Cable is Ok also, avarage. Tips I haven't tried any since I have my own tips of choice (KB07 + Spinfit W1)

-CONCLUSION: Bang for your buck, Grab it, 5 out of 5. Variations WAS the king, no longer now. NOT A RIVAL BUT A USURPER.
I have zero need to try any other tribrid with similar tunings. Good job Linsoul. Cheers to THIEAUDIO. 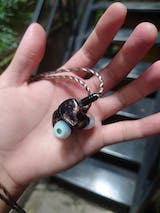 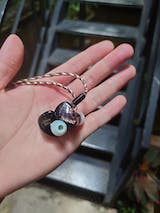 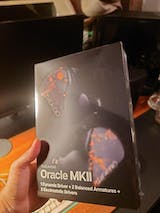 great sound, no option to hang with a case with a lace in your neck, no clip, menu is terrible, no auto rotate. hard to work out this player

I've been in the iem hobby for several years, and so far have, somehow, not tried a single KZ iem, until now. And I have to say I'm pleasantly surprised. This iem is impressive for a number of reasons. Firstly, it is a hybrid set combining balanced armatures, and a dynamic driver, but this set has no obvious crossover at all. It is an extremely coherent blending of the drivers. Another impressive quality is that the BA drivers don't have any of the normal metallic tone that BAs sometimes exhibit. So what KZ has put out here is a very musical set that shows off some very nuanced driver implementation.

This set is tuned well for long listening sessions. The sound is smooth, engaging, and more detailed than I expected. It is a v-shaped tuning, though it is tilted towards the bassier side of the spectrum, so the upper mids and treble stay relatively tame, which goes a long way in making this an exceptionally comfortable set. Furthermore, it does not seem to lose much for a set that has reduced highs. The Treble still has good extension and sparkle, and the upper mids still have enough energy to keep you engaged. I would describe The ZS10 Pro X as an intentionally inoffensive set, with some pretty impressive technicalities.

The lowend on this set is elevated, but tasteful. Bass never feels like it’s flooding the sound field, but it is raised enough to give a little more presence and weight to instruments. The subbass has great extension, and does a great job of subtly coloring non-bass notes with an almost imperceivable rumble. This has the effect of making the overall tone seem grounded and solid. The midbass has less emphasis than the sub bass, but it’s still capable of delivering solid chunky basslines and kicks. The midbass is not all that snappy but has great synergy with the subbass, making for an authoritative lowend that’s capable of carrying the track without stealing the show.

You definitely can hear the dip in the mids, and that might not be to everyone’s liking. I personally don't mind it, and I'd even say I prefer it to the alternative of having the upper mids be a source of discomfort. Tonally, there is a bit of veil because of this dip, and this set misses out on a sense of clarity that you often get from BA sets. But you also aren't getting any harsh tonality that BA are known for. Another benefit of these mids is that they leave room for the bass to step up a little without creating mudiness. So these mids have some trade offs, but they do feel intentional and I appreciate the choices KZ made in creating this set to be comfort-forward.

The treble fades into the background on this set, which is really a best case scenario, because if you're too aware of the treble, it's probably a disruption to your listening experience. The treble is tuned here to be out of the way, but adding a beautiful shine to the entire sound. The treble level is well suited for long comfortable sessions but without giving up on detail. This set does have a lot to offer in the sparkly and detailed tones and even a surprisingly good extension into the air region, again, without over-emphasis. High percussion trails sound exceptionally accurate on the zs10 pro x.

The overall detail of this set is rather good. And it's a very natural sounding detail because it’s produced without relying on treble volume, so the more you listen, the more the zs10 pro x reveals its details. The detail won't impress the way a planar set will, but the zs10 pro x provides enough detail to provide a very natural tone.

The soundstage is also surprisingly good on this set, as it has a rather round immersive shape, which makes the sound of the zs10pro x rather immersive and musical. It's not a huge soundfield, but it does feel like sounds are coming from outside of your head, from side-to-side, front-back and even above. The imaging within that field is equally impressive, giving a very realistic sense of placement as sound is moving all around you.

This set is a fantastic all-around enjoyable set which is sure to please pretty much anyone who tries it. It is just so effortlessly engaging and inoffensive. This set is an amazing every-day carry earphone. But the one downside is that I think it sounds the best with foam tips, which are not included. But if you can spend another few bucks to improve this set, it is well worth it, to make this set a top budget rec for 2022.

Did not like the feel of the ear tips

Had this cable for just over a year now and it has seen light use. Used primarily when I go for walks with the dogs. It is now unusable as what seems like a loose connection in the plug gives either nothing or static.

Maybe I should only expect a year of light use, but seems like poor value?